AT&T just installed fiber to my house. It's fast. I get a steady 949 Mbps up and down. I had no complaints about the 160 Mbps/14 Mbps I was getting from Cox, but my inner geek couldn't say no to faster-for-the-same-price. The install was pretty smooth, but during the bumps, I would type nonsense URLs … END_OF_DOCUMENT_TOKEN_TO_BE_REPLACED 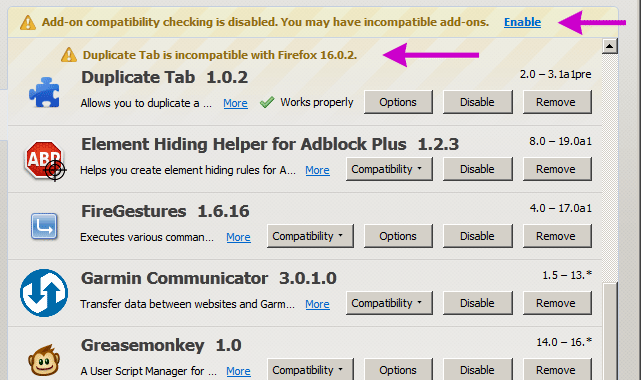 Disable Add-on Compatibility Checks is a great little add-on for both Firefox and Thunderbird. It makes Mozilla's rapid release cycle totally tolerable. If the keeper of your favorite plugin can't keep up with Mozilla's zany release schedule, worry no more. Disable Add-on Compatibility Checks does exactly what it sounds like it'll do. Install it (no … END_OF_DOCUMENT_TOKEN_TO_BE_REPLACED

Remember back when Firefox 3.5.17 came out? I'll give you a clue; it was 2011. It's just a year later and the latest version of Firefox (15.0) ships with new features under the hood, including better memory handling for plugins and new "Silent, background updates," but it's not enough. When Mozilla switched Firefox to a … END_OF_DOCUMENT_TOKEN_TO_BE_REPLACED

Some tags used on this blog:

You're one of several.