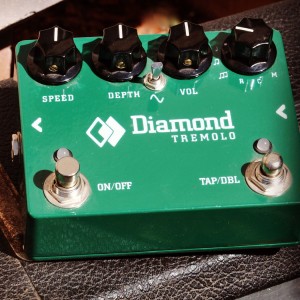 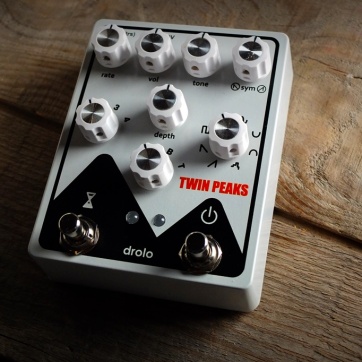 Updated for 2020. When this UX snob of a pedal junkie caught the tremolo bug, he started referring to himself in the third person and made a spreadsheet comparing 30+ different tap tremolo pedals. …Then he blogged about it.

If you’re lazy or impatient, use these links to skip to a juicier section of the tremolo pedal roundup. But keep in mind: my trem criteria, while not so odd, might not be the same as yours. Spoiler alert: I initially got the EHX Super Pulsar, but found reasons to replace it with the superior Swindler Effects Red Mountain V2. Couldn’t be happier.

Tremolo, in the classical sense, is a rhythmic wavering of a note. E.g. like that produced by a violinist rapidly shaking the bow hand. But then some doofus decided to call the electric guitar vibrato system “tremolo,” a misnomer which caused a few generations of guitar wankers to not understand what tremolo means. (“Whammy bar” is a much better name for guitar vibrato, anyhow).

In the effect pedal sense, which is why we’re all here, there are two main types of tremolo.

Amplitude tremolo changes the volume of the signal at a specified speed and depth. From abrupt on-off-on-off square-wave chop, to a subtle waveform barely imparting a warble, and everything between.

Harmonic tremolo chops the signal in half, treble (high pitches) and bass (low-end), and modulates them out of phase with each other. …Which is to say, it’s more of a tonal wobbling.

All of the pedals in this tremolo pedal roundup can do amplitude tremolo; only a few of them can also do harmonic tremolo. So if you’re stuck on a harmonic tap trem, your choice is much easier. Me? I got the Swindler Red Mountain V2 in part because it is dual-mode. I like it both ways. 😉

First I thought I wanted a tremolo pedal with the ability to control the tremolo speed via an expression pedal, but I quickly realized that easy, onboard tap tempo was more important. As I dug deeper, I found other things I cared about. You likely have at least slightly different tremolo criteria.

To be considered a contender for my tremolo affections, a pedal has to have all of these features:

And the Ernie Ball Expression Tremolo pedal also fails to make the cut, but it’s an expression pedal form factor, so if that’s your thing, check it out. Oh, and Matthews Effects The Conductor v2 might lose here because they put the tap right next to other controls. And while an astute reader noted in the comments below that the tap switch is significantly higher than surrounding controls, making it less likely you’ll knob-mash, I’d have to play with one before endorsing this unconventional UI choice.

We can bend most other tap trem pedals to our dotted whimsies by setting the div to “triplet” and then tapping half-time. (On the one and three, instead of on all four beats).  …Which is good enough for me, in a pinch.

But the Dedalo Tres Tap Tremolo Pedal does not have a volume knob.

Several high-profile tap trem pedals fail here by combining rate and div into one knob. …And I can’t even fathom that “saving space” was a real concern, because they then need to add another controller to switch the function of the rate/div knob. If you’re always going to use it one way or the other, then you might not care about this. But I sometimes use my pedal boards for noise projects, and lazy me can’t be bothered to deal with the design shortcomings of: Empress Tremolo 2, Seymour Duncan Shapeshifter, Copilot Polypus, et al.

This is another place the Zvex Sonar doesn’t shine; it can only change wave shapes via hidden controls. I.e. you have to hold down a “shift” button and use a knob for this unlabeled purpose.

It requires a whopping 300ma of power and their website claims it’s picky about voltage. They say it doesn’t work with a Truetone 1 Spot power supply. …One of the most popular, high-amperage 9v power supplies. No thanks.

E.g. you have to pick between having access to subdivisions 1,2,4 OR 3,6,8 via a dip switch. Want to go from harmonic to amplitude mode? Yep. Dipswitch. Etc. Yes, you can sort of work around this using presets and/or midi, but that’s not what I’m looking for in tremolo UX.

Please note: As I eliminated pedals from contention via the criteria above, I usually stopped gathering data for the chaff. So there are several holes in the tap tempo pedal chart. (Send me a note if you want to add any data).

Other Tremolo Pedal Features to Consider

The features above were all chopping blocks for my decision process. The trem options below are added bonuses, frosting on the cake.

Get the Swindler Red Mountain V2.

Pros: The best feature set in a small (less than 3″x5″) pedal enclosure. Red Mountain is the only dual-mode (harmonic and amplitude tremolo) in the roundup. It stores one preset/favorite for later recall. Stutter mode. Stereo ping-pong. Etc.

Cons: Doesn’t have any rhythm settings, so you get clasic on-off-on-off pattern. Plain-Jane white paint with black text will be pure minimalist (and UX) bliss for some, but flashy-pedalboard folk might yawn at that. You might be able to find the discontinued “Signature” model, if you’re looking for something with more color. 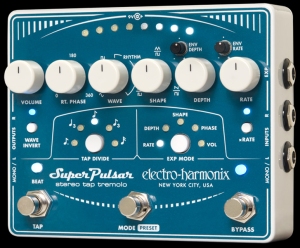 Get the Electro-Harmonix Super Pulsar.

Pros: Features galore. Available below suggested retail on eBay. …which might hint at something?

Cons: All those features come at a cost. At almost 5″x6″, it’s considerably larger than the other tremolo pedals in this roundup, so make sure you have space on your board. Mediocre UX takes a while to learn, and longer to master.

Get the Diamond TRM1 Tremolo.

Pros: It checks most requisite boxes with a couple bonus amenities (two rhythm patterns, kill switch, etc.) using only seven controls. …Which means it’s simpler than most. #UX
I liked the sound of its “chaotic” interval with a hard square waveform.

Want harmonic tremolo more than you care about other criteria?

Get the Walrus Monument or the Drolo Twin Peaks.

I’ll preface by saying both the Monument and Twin Peaks are up here in the rarefied air because of their harmonic tremolo options. They’re both great pedals, but they don’t tick as many of my criteria boxes as the pedals above, (or as many as some that didn’t even make the cut). They do however tick enough of the right boxes so they’d both be in the runner-up section (below) even if they lacked the harmonic switch.

Pros: The Monument is the simpler layout of the two harmonic tremolo finalists. But the Twin Peaks v4 offers tone and wave symmetry controls, if you prefer those features to a less dense control panel. Both come in geologic-themed tri-color designs, perhaps a breath of artsy fresh air on your board, compared to the options above.

Cons: Both the Monument and Twin Peaks lack rhythmic patterns. Neither has native dotted subdivisions, but because both have a triplet setting, you can fake it by tapping half-time. For me, the extra knobs on the Twin Peaks are (probably) more noise than signal; I wouldn’t use them much.

In no particular order:

Even if your criteria is close to mine, you might find something about one of these to tickle your tremolo fancy. Look into them.

Many tap tremolo pedals not favorably noted in this review are great pedals beloved by countless people. I know that, and I don’t discount their quality and utility at all. They’re just not what I want in a trem. (Which is far from saying I wouldn’t use one if somebody gave me one!)

Is your tremolo pedal criteria vastly different from mine? You should check out the reddit comment thread about this tremolo roundup wherein people discuss other options. E.g. if you’re into menu-driven multi-effect options like the Modfactor, MD500, Mobius, etc.

Here’s a link to that spreadsheet again. Check it out.

Dan Dreifort consults on UX and SEO when he’s not making noise with pedals and friends. (Check out synthband.com?) His favorite color is pizza.

Dan Dreifort is a champion nacho spinner. Chicks dig that. View all posts by Dan Dreifort

You got sumthin' to say? (Be nice.) Cancel reply

Some tags used on this blog:

You're one of several.